The Militia is dedicated to the preservation of our FREEDOM, the security of our RIGHTS and the Restoration Of Our Constitution to it's rightful place as the law of our Great Republic!

In the beginning of change, the Patriot is Scarce, Brave, Hated and Scorned. When his cause succeeds, the timid join him. For it cost nothing then, to be a Patriot.

Enemies Of The People

The treasonous adversaries that are common to Americans everywhere.

The day is now, when public officials should answer to the Constitution and the people. Or as the alternative, they will eventually answer to the People’s Unregulated Militia.

If you don’t hate the Marxist Progressive Traitors, then you are a Damn Fool, or One of them. 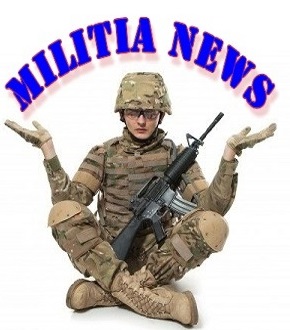 Militia News is dedicated to informing, promoting, and training the militia. Our loyalty is to the foundation on which America was built – a foundation which, in recent years, has been seriously attacked and undermined. Some examples of this can be seen by the government taking an ever larger portion of your wages, taxing your property, monitoring your speech, tracking your location, restricting your travel, controlling your healthcare, and can now assassinate you without charge or trial anytime it wants by simply calling you a terrorist. To that end, you should ask yourself who is going to stand up and defend your liberty from an ever growing tyrannical government? Not the politicians, for many of them are working together with the perpetrators. Only the Militia is empower by the Constitution of the United States to protect the people from the government. This is clearly stated in the Second Amendment: "A well regulated Militia, being necessary to the security of a free State, the right of the people to keep and bear Arms, shall not be infringed."

In a Constitutional Republic, there is no right nor left, no far right, no far left; there are only those who believe in our form of government, as established, and those who do not. Those who do not are simply traitors, or ignorant followers of traitors.

Militia News is not constrained by the government-controlled media, or tied to the culture of insular thinking that is dominated by special interests. We provide relevant, accurate and honest news about God, Family and Country.

Click below to watch Tucker: The American government is at war with its own people

We’re at a pivotal moment in American history.  Never in our lifetimes have the consequences of liberal big government been on such ubiquitous display, not only here, but everywhere we look.  The socialist democracies of Western Europe stand at the precipice of complete downfall.  Many of our own liberal states…

Watch Palestinians celebrating the fall of the twin towers on 9/11. Recorded by Reuters in East Jerusalem immediately after the attacks, showed Palestinians cheering on a street. The footage was provided by the news agency to clients including Fox News, CNN and NBC, who included it in their rolling coverage…

Forty-seven years ago, an unlikely band of antiwar activists calling themselves “The Citizens Commission to Investigate the FBI” broke into a Bureau branch office in Media, Pennsylvania, making off with reams of classified documents. Despite a manhunt involving 200 agents at its peak, the burglars were never caught, but the…

On April 19, 1993, 26 children were killed at the Branch Davidian compound near Waco, Texas, and still those responsible within the FBI remain at large. It was during this time President Clinton and the former Attorney General Janet Reno claimed, the federal government bears no responsibility for the deaths…

Over 60 FBI agents took bribes from liberal media outlets, including CNN, The New York Times, NBC News and many others. The bribes consisted of expensive dinners, NFL tickets, concert tickets, cruises and expensive vacations. The agents allegedly took a total of 300 gifts from the liberal news outlets. I…

The following is from the ACLU: In recent years, the federal government has significantly ramped up its efforts to monitor people on social media. The FBI, for one, has repeatedly acknowledged that it engages in surveillance of social media posts. So it was surprising when the bureau responded to our…

We have seen a growing list of senior officials at the Federal Bureau of Investigation (FBI) and Department of Justice (DOJ) being fired or leaving in disgrace. Now the New York Times informs us that the FBI began an investigation in May of 2017 looking at whether President Donald Trump…

A letter sent by the FBI to Martin Luther King in 1964 reveals how he was urged to commit suicide. The letter which was published in 2014 exposes shocking details on the government’s campaign to sabotage the civil rights leader. On Tuesday, Beverly Gage wrote for the New York Times…

The FBI leadership under the Obama Administration took many actions that deviated from standard practice [i.e. were corrupt and criminal] in their efforts to exonerate Hillary from her crimes and then spy and frame candidate and then President Trump. Today current members of the FBI are embarrassed to even turn…

Trump’s AG pick was top cop during the federal siege and killing of Randy Weaver’s wife and son. The Senate Judiciary Committee hearings for Attorney General nominee William Barr have focused heavily on Barr’s views on Special Counsel Robert Mueller. But nobody is asking about Barr’s legal crusade for blanket…

In examining the cast of FBI and senior Department of Justice (DOJ) officials fired, retired, resigned and under investigation since May 2017, the breathtaking scope of the FBI’s unprecedented criminal efforts to overthrow a presidential election and frame a newly elected president serves as Exhibit A for the organization’s disbandment.…

The corruption at the highest levels of the FBI is getting impossible to ignore — unless one is a member of the mainstream media. In what should be one of the biggest stories of the year, 16 FBI agents raided the home of Dennis Nathan Cain on Nov. 19. Cain…