Ann Coulter: Trump Will Be The Last Republican President 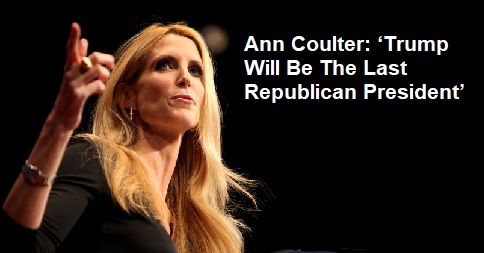 Best selling author and conservative pundit Ann Coulter — who early in 2016 predicted Doanld Trump’s presidential win — said that because of changing demographics and the propensity of many young immigrants to vote for liberals, Donald Trump “will be the last Republican president.”

In a Nov. 28 interview with Editor in-Chief Alex Marlow on Breitbart News Daily, Coulter said, “Every day, more and more immigrants turn 18 and start voting, canceling out all of your votes. It’s about five more years. Trump will be the last Republican president.”

“You think, ‘Oh well, we may get another Supreme Court nomination, that will save us,'” she said. “No, no, the Democrats – as we saw in this last election – they can’t wait 10 years for demographics to change, they have to invent the Russia conspiracy. They’re so upset about this brief interregnum with Donald Trump. No.”

“Why even fight the Florida or Georgia elections?” she continued. “The whole country will be yours moments from now. No, we can’t wait, we can’t wait.”

“So, I assume they’ll pack the court,” said Coulter. “It won’t matter how many Trump appoints – he could appoint, replace four Supreme Court justices. Then President Beto [O’Rourke] or President Kamala [Harris] will come in and say, ‘Hey, I think we need four more justices on the Supreme Court.’”

Later in the interview Coulter discussed how close the 2016 race was and why the Trump team cannot plan on running the same type of race in 2020.

“They barely won the last election,” Coulter said of the 2016 Trump campaign. “It was very exciting, it was great, everyone remembers election night. You always have this feeling we’re invincible and ha, ha, ha you guys are losers, you lost.”