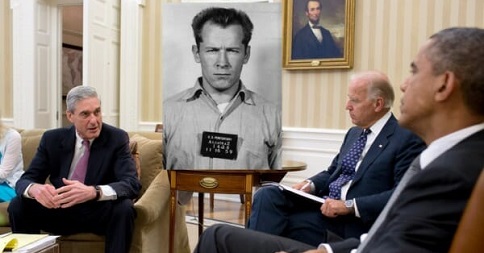 You’d hardly know it from the wall-to-wall coverage of the George Zimmerman case, but there’s another trial going on that’s at least as worthy of national attention. That’s the 32-count federal racketeering indictment against James “Whitey” Bulger, a Boston mob kingpin linked to at least 19 murders, captured in 2011 after 16 years on the lam.

Bulger, a former “Top Echelon Informant” for the FBI, is a monster, but he’s hardly the only villain in a story where “gangster government” leaves the realm of metaphor. As Boston Globe reporters Kevin Cullen and Shelley Murphy explain in their riveting new biography of Bulger, the Irish mobster ruled South Boston for nearly two decades, “protected by the arrogance and corruption of an FBI and a Justice Department that tolerated murder as an acceptable price of doing effective law enforcement.”

Federal rules ban cameras in most criminal trials, which is one reason the Bulger case hasn’t gotten the national attention it deserves. So Court TV junkies missed last Wednesday’s explosive exchange between the Bulger and his former henchman-turned-federal-witness, Kevin Weeks, when Weeks called Bulger a “rat:”

But the public’s missing something more valuable than mob drama: “This trial is not just about organized crime,” writes the Boston Herald’s Margery Eagan, it involves “the corruption of the federal government — the same government banning you from this trial — in the form of a disgraced FBI. It’s a civics lesson worthy of us all.”

Indeed, from 1975 to 1990, in its quest to bring down the Italian mob, the FBI’s Boston office became partner in crime to Bulger’s “Winter Hill Gang.” A 2004 House Committee on Government Reform report, “Everything Secret Degenerates,” found that “a number of men were murdered because they came to the government with information incriminating informants” and the FBI tipped them off.

“When you give us information on one person and they got killed,” then a second, and a third, Bulger’s partner Steven “The Rifleman” Flemmi testified in 2008: “I mean, he’s an FBI agent, he’s not stupid.”

Innocents died in the crossfire. Last week, the court heard from the widow of one of them, Pat Donahue, who was left to raise three sons on her own when her husband gave a ride to the wrong guy in 1982. Michael Donahue, who died in a hail of bullets on the Southie waterfront, “had no idea that Halloran was marked for death because he had shopped Whitey Bulger to the FBI and Whitey’s corrupt FBI handler had tipped Whitey off.”

That agent, John Connolly, is behind bars, but the federal government has gone to great lengths to avoid a proper reckoning for other officials who aided and abetted Bulger’s reign. In 2001, the Bush administration invoked executive privilege for five months to shield FBI documents about the Bulger affair, in what then-Rep. Dan Burton called “an utterly unprecedented” attempt to drape DOJ in a “veil of secrecy.”

Meanwhile, instead of promptly settling the Donahue family’s wrongful death suit, “the government spent millions on 10 years of litigation, flying Justice Department lawyers up from Washington and putting them up at four-star hotels.”

Cullen and Murphy quote Tommy Donahue, eight years old when his father was murdered: “Our own government, the FBI, the Justice Department, has never said to my mother, to me and my brothers, ‘We’re sorry.’”

President Obama continually derides “cynics” whose distrust of government stands in the way of all the good things it can do for us. It’s wrong, Obama told college graduates in May 2013, to think of government as “some separate, sinister entity.”

Try telling that to the Donahues.