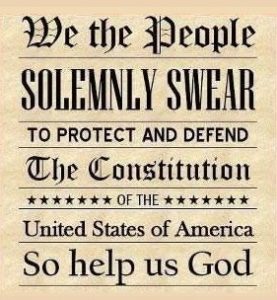 In America all civil officers, police officers and military personnel are under oath to uphold and defend the Constitution. However, the U.S. Constitution palaces the duty to: “Execute the laws of the Union, suppress insurrection, and repel invasions,” upon “the militia,” not the civil government! (Article one Section 8, Clause 15).

1. The laws of the Union are the U.S. and State Constitutions, the Bill of Rights and the laws made pursuant thereto.

3. An invasion is: “An encroachment upon the rights of another.” (Black’s Law Dictionary, 6th edition) thus, the invasion spoken of in Constitution context, can only be an official, though an unlawful act of the government, “invading” our right to privacy, our persons, houses, papers or effects; the conducting of unlawful (warrant-less) search and seizures; or, depriving of life, liberty, or property without due process.

We have been deliberately kept ignorant of or rights and duty, to act in our own persons in the name of “We the People,” expressly personified in the “People’s Unregulated Militia.”

Our primary Constitutional duty is to: enforce the laws, Constitution, and Bill of Rights upon our own government; To suppress insurrections against the Constitution, committed by government officials and employees; and to repel government from the unlawful invasion of our secured rights.

These are the Constitutional duties of the People’s Unregulated Militia. Not the U.S. Armed Forces, National Guard, or civil police. We the People are the “home guard.”

Our founding fathers were not overly concerned with individual crimes. Their greatest concern was the official abuse of power, and crimes committed by those in public office. The People’s Unregulated Militia is to uphold the Constitution. Whether in support of lawful government, or in defense of the people against unlawful acts of government.

The day is now, when public officials should answer to the Constitution and the people. Or as the alternative, they will eventually answer to the People’s Unregulated Militia.

Please uphold and defend our Constitution by joining or starting a Militia.