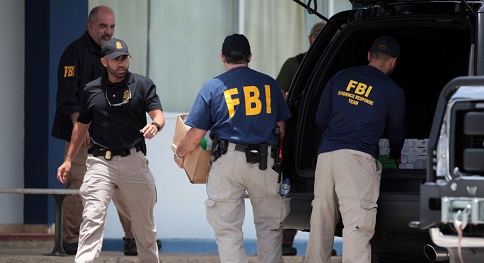 An anonymous informant provides documents and evidence of government corruption at the highest levels in the U.S. capital, and the federal cops are deployed to raid the informant’s home. This is the America of the 21st Century thanks to the Deep State.

A whistleblower who turned over documents regarding the Clinton Foundation and “Uranium One” to a government watchdog group has had his home raided by the FBI, the whistleblower’s attorney says.

The Federal Bureau of Investigation raided the home of alleged whistleblower, Dennis Nathan Cain, a former FBI contractor who turned over documents regarding the Clinton Foundation and Uranium One to Wikileaks. While those documents were in the possession of the FBI, the suspected corrupt official in charge still felt in necessary to raid the person’s home using a FISA search warrant. Cain had also turned the documents over to both the House and Senate Intelligence Committees.

The inspector general at the chaotic Justice Department was told that this batch of documents indicate federal officials neglected to investigate possible criminal activity on the part of former Secretary of State Hillary Clinton, the Clinton Foundation, and Rosatom, the Russian company that bought Uranium One.

The documents the whistleblower turned over to the DOJ may indicate that then-FBI Director Robert Mueller also failed to look into allegations of criminal activity surrounding the private company Rosatom and other Russian government entities involved with Uranium One.

According to a former federal law enforcement official, Mueller was Secretary Hillary Clinton’s (and her husband Bill’s) bagman for the “Uranium One” Russia deal in which President Barack Obama secretly sold a reported 20 percent of the U.S. Uranium reserve to a Russian company under the control of President Vladimir Putin.

In turn, the so-called charity known as the Clinton Foundation received a contribution of $146-million from the Russian Uranium company’s subsidiary firm. Bill Clinton also was paid upwards of $500,000.00 for about a one-hour speech in Moscow, a sum that has public speakers surprised about and jealous over.

“This was another one of the corrupt acts of treason by the Obama administration and the Democratic Party’s sweethearts Bill and Hillary Clinton that would never be covered by the news media or investigated by the Justice Department or the FBI,” said the former federal cop.

“Make sure this whistleblower gets protection. People who are ready to testify against the Clintons, well they kind of end up dead, missing or [they] commit suicide,” warns conservative Mary Scirdinsky in Tea Party News.

As if there isn’t enough evidence for the news media to investigate and expose the abuses being caused by a rogue Special Counsel and corrupt FBI officials, a journalist is being denied First Amendment protections merely because he’s a conservative.

The conservative journalist, Dr. Jerome Corsi, was in plea negotiations with Robert Mueller after being questioned by the special counsel for over 40 hours about his ‘inside sources’ at WikiLeaks and alleged advance knowledge Julian Assange was going to release John Podesta’s emails.

Since Mueller cannot bring charges on the Russian collusion hoax, he has targeted Corsi for making a ‘false statement’ after putting the best-selling author through hell interrogations.

Dr. Corsi subsequently retained counsel and is preparing to sue the Justice Department and Special Counsel Robert Mueller for prosecutorial misconduct in his case.

“I have retained attorney Larry Klayman to assist David Gray in my defense. In a memo to my attorneys, I have instructed Klayman and Gray to file with Acting AG Whitaker a criminal complaint against Mueller’s Special Counsel and the DOJ for prosecutorial misconduct in my case,” Dr. Corsi said in a tweet Wednesday.

Investigative Journalist and author Dr. Jerome Corsi exclusively tells One America News that he will be filing a criminal complaint with Acting Attorney General Whitaker against Robert Mueller.