FISA Memo Exposing Political Bias And Corruption At The FBI 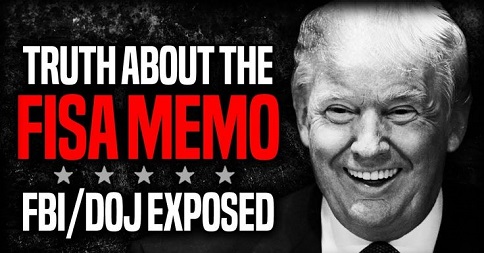 The Deep State is roaring with anger … and so are its media allies.

And they are mad that light is exposing their darkness.

Government bureaucrats always try to enlarge the power of their agency … and they always oppose transparency and accountability.

They are in open rebellion against President Trump … and in reality, against the American people.

The “FISA Memo” is now out. Transparency is always better than government hiding their secrets.

But instead of transparency, the FBI Director – appointed by President Trump – publicly opposed releasing the memo.

Instead, he decided to be in collusion with the Deep State cover-up…

It’s a cover-up of lies, deceit and illegal/unconstitutional actions by a small elitist group within the FBI and the DOJ.

With the release of the FISA memo, the American people will be able to see for themselves what the handwringing by Democrats and the Deep State bureaucrats is all about.

The IRS targeting of Tea Party groups and the DOJ’s “Fast and Furious” gun-running scandal under Barack Obama show that he weaponized executive agencies to advance his own political agenda.

Now, the FBI and Department of Justice also became weaponized when its ideological and politicized Deep State operatives lied to and misled a FISA judge to obtain authorization to spy on a political opponent and interfere with the 2016 elections.

They used an unvetted, Democratic National Committee-funded Russia-based political opposition document against Donald Trump to secure a FISA warrant to conduct surveillance of Trump and members of his campaign.

Spying on an opposition political candidate and campaign is corruption.

Those that did this need to be exposed and punished…

Congress needs to act to ensure this never happens again … by destroying the Deep State within the FBI and the DOJ … and holding those responsible accountable.

It must be revised soon so that this doesn’t happen again to any president-elect or sitting president, or anyone else in the future.