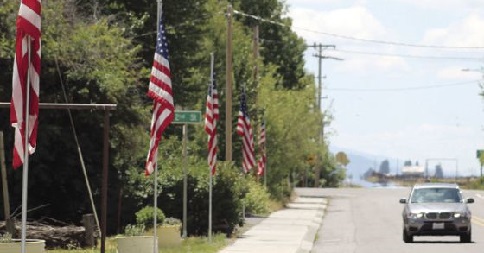 FORT KLAMATH — The Oregon Department of Transportation revoked a permit it gave to the Civic Improvement Club of Fort Klamath to display American flags along the town’s highway.

The revocation includes a grace period for flags to stay up until July 25. It follows a clash among community members over whether placement of the flags was appropriate.

The original permit obtained by CIC in 2015 said flags could be hung along the east side of Crater Lake Highway for holiday purposes. Flags could also be displayed for up to two weeks preceding the holiday if they were taken down immediately after.

ODOT spokesperson Peter Murphy said the organization revoked the permit because the flags did not meet its standards for objects displayed in a right-of-way.

“We’re real specific about what can be in the right-of-way,” he said. “We can only allow official traffic control devices to be in our right of way, and a flag doesn’t fit that.”

Bill Nicholson, a Fort Klamath resident and retired rancher, said they hung flags for Memorial Day, Veterans Day, Flag Day and Independence Day. They often kept flags up for days or weeks after a holiday. Nicholson said this is because some holidays fall within weeks of each other.

“It’s a declining community, like a lot of small areas, and we have a few people in the area that are very active,” he said. “The activity of putting flags up is one of the things people do.

Robin Hurt, owner of Jo’s Motel and Campground near the flags, said she was frustrated by the flags staying up for so long. She contacted ODOT to see a copy of the organization’s permit, and soon after, ODOT told her the permit would be revoked.

Hurt does not take issue with flags hung for holiday celebrations or expressions of patriotism, she told the Herald and News Thursday; to her, it is a matter of following ODOT’s policy and honoring different opinions.

“I felt, as a person who lives along here, I have some input. It is a political symbol and and I think there’s no place for political and religious symbols on the right-of-way.”

CIC officers could not be reached for comment, but they were meeting yesterday evening where they were expected to discuss the matter.