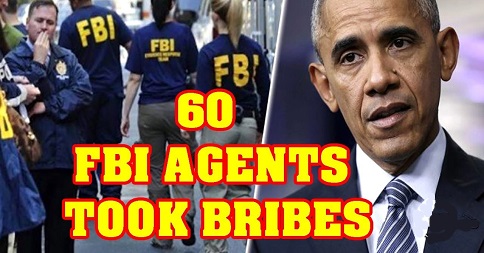 Over 60 FBI agents took bribes from liberal media outlets, including CNN, The New York Times, NBC News and many others.

I guess we now know what Barack Obama meant by his slogan “Hope and Change!”

Via True Pundit: “Access to the FBI is for sale.

However, Horowitz failed to stipulate that number is ONLY in Washington D.C. which covers one field office and FBI headquarters. The Inspector General did not examine the FBI’s other field offices, officials said. And the problem of taking free gifts for Intel is rampant, officials said.

And so does the corruption. Outright bribery.

FBI sources who spoke to True Pundit divulged the names of three media outlets: NY Times, CNN and NBC News as having surfaced in recent external investigations. But there are dozens more, large and small.

FBI Director Christopher Wray wants this the issue of bribery and the FBI to disappear from news headlines, yet he has not launched an internal review nationwide to determine how rampant this problem is inside the FBI, sources said.

Why no national review by the Inspector General’s office?

In fact, high-ranking FBI officials do not want the list of FBI agents and news media divulged publicly either.

Wray and Horowitz are protecting the agents who took bribes, as well as their media enablers.

Just business as usual in The Swamp.

If Wray cared, he would find thousands of bribes and favors changing hands inside the FBI across the country.

But that would likely include FBI brass who may make a nice dime on the side selling access to FBI Intel and policy outright as well. Agents like Robert Hanssen. Or like a deputy director’s wife getting $1.25 million in campaign contributions while her husband was investigating — and clearing — the source of the funds from a criminal investigation. Rigging an investigation for cash. Is that considered a gift? Or is that a new category?

And Wray certainly recognizes that is a place he does not want to venture.

It is ugly and Wray — as he has done since taking office — wants to pretend it’s not an epidemic.

And what would Wray do if some of the involved media organizations turned around and said the payoffs for Intel were a trade-off for placing stories the FBI wanted in their publications and newscasts?

Just the price of doing business behind the curtain with the FBI.

The FBI doesn’t want to lose its ability to smear its political enemies and access to the enablers — its media partners — who make it possible.

And Big Media doesn’t want to lose its pipeline to free Intel.”

This is what happens when we elected a President based on a slogan, a few well-read speeches, and the color of his skin. Barack Obama should have never been our president for two terms. He let the FBI become corrupted in an effort to turn them into an extension of the Democrat Party to ensure the left would never lose another election again. What a great legacy for the first African American President, don’t you think?