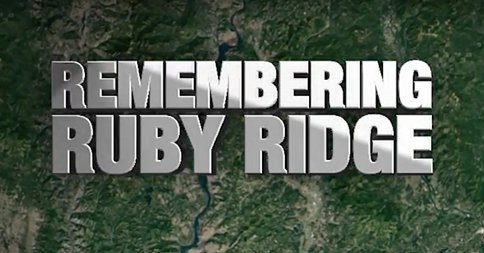 “Ruby Ridge” used to refer to a geographical location in the state of Idaho, but after an incident that took place there 26 years ago the phrase has come to refer to a scandalous series of events that opened the eyes of many people to the inner workings of the federal government, including the vaunted Federal Bureau of Investigation. Now that 10 years have passed, the feds will accelerate their ongoing effort to “move forward” and have the scandal declared “ancient history.” But the Ruby Ridge episode should not be soon forgotten.

On August 21, 1992 a paramilitary unit of the U.S. Marshals Service ventured onto the 20-acre property known as Ruby Ridge. A man named Randy Weaver owned the land and he lived there with his wife, children, and a family friend, Kevin Harris. There was an outstanding warrant for Weaver’s arrest for a firearms offense and the marshals were surveilling the premises. When the family dog noticed the marshals sneaking around in the woods, it began to bark wildly. Weaver’s 14-year-old boy, Sammy, and Kevin Harris proceeded to grab their rifles because they thought the dog had come upon a wild animal.

A firefight erupted when a marshal shot and killed the dog. Enraged that the family pet had been cut down for no good reason, Sammy shot into the woods at the unidentified trespasser. Within a few minutes, two human beings were shot dead: Sammy Weaver and a marshal. Harris and the Weaver family retreated to their cabin and the marshals retreated from the mountain and called the FBI for assistance.

During the night, FBI snipers took positions around the Weaver cabin. There is no dispute about the fact that the snipers were given illegal “shoot to kill” orders. Under the law, police agents can use deadly force to defend themselves and others from imminent attack, but these snipers were instructed to shoot any adult who was armed and outside the cabin, regardless of whether the adult posed a threat or not. The next morning, an FBI agent shot and wounded Randy Weaver. A few moments later, the same agent shot Weaver’s wife in the head as she was standing in the doorway of her home holding a baby in her arms. The FBI snipers had not yet announced their presence and had not given the Weavers an opportunity to peacefully surrender.

After an 11-day standoff, Weaver agreed to surrender. The FBI told the world that it had apprehended a band of dangerous racists. The New York Times was duped into describing a family (two parents, three children) and one adult friend as “an armed separatist brigade.” The Department of Justice proceeded to take over the case, charging Weaver and Harris with conspiracy to commit “murder.” Federal prosecutors asked an Idaho jury to impose the death penalty. Instead, the jury acquitted Weaver and Harris of all of the serious criminal charges.

Embarrassed by the outcome, FBI officials told the world that there would be a thorough review of the case, but the Bureau closed ranks and covered up the mess. FBI director Louis Freeh went so far as to promote one of the agents involved, Larry Potts, to the Bureau’s number-two position.

When Weaver sued the federal government for the wrongful death of his wife and son, the government that had tried to kill him twice now sought an out-of-court settlement. In August 1995 the U.S. government paid the Weaver family $3.1 million. On the condition that his name not be used in an article, one Department of Justice official told the Washington Post that if Weaver’s suit had gone to trial in Idaho, he probably would have been awarded $200 million.

With the intervening events at Waco, more and more people began to question the veracity of Department of Justice and FBI accounts and whether the federal government had the capacity to hold its own agents accountable for criminal misconduct. Like the Watergate scandal, however, the response to the initial illegality turned out to be even more shocking and disturbing.

When an FBI supervisor, Michael Kahoe, admitted to destroying evidence and obstructing justice, he was eventually prosecuted but only after being kept on the FBI payroll until his 50th birthday — so that he would be eligible for his retirement pension. And when Larry Potts was finally forced into retirement, FBI officials flew into Washington from around the country for his going-away bash. Those officials claimed to be on “official business” so they billed the taxpayers for the trip. After the fraud was leaked to the press by some anonymous and apparently sickened FBI agent, the merry band of party-goers were not discharged from service. Instead, a letter was placed in their personnel file, chiding them with “inattention to detail.”

An Idaho prosecutor did bring manslaughter charges against the FBI sniper who shot Vicki Weaver. That move really outraged the feds because they insisted that they were capable of policing their own — so long as they did not have any outside “interference.”

The Department of Justice was so disturbed by the indictment of its agent that they dispatched the solicitor general to a federal appellate court to argue that the charges should be dismissed. (The solicitor general ordinarily only makes oral arguments to the Supreme Court). The solicitor general told the judicial panel that even if the evidence supported the charges, the case should be thrown out because “federal law enforcement agents are privileged to do what would otherwise be unlawful if done by a private citizen.” The appeals court rejected that sweeping argument for a license to kill, but by the time that ruling came down last June, a new local prosecutor was in office in Boundary County, Idaho, and he announced that it was time to put this whole unpleasant episode behind us and to “move on.” Thus, the criminal case against the sniper was dropped.

A new generation of young people who have never heard of Ruby Ridge are now emerging from the public school system and are heading off to college and will thereafter begin their careers in business, education, journalism, government and other fields. This generation will find it hard to fathom that the federal government could have killed a boy and an unarmed woman and then tried to deceive everyone about what had actually occurred and, in some instances, rationalize what did occur. That is why it is important to remember Ruby Ridge. Someone needs to remind the young people (and everyone else) that it really did happen — and that it will happen again if the government is not kept on a short leash. No one will learn about the incident when they tour the FBI facility in Washington. It goes unmentioned for some reason.