Stunning List: 35 Times The FBI Deviated From Standard Practice Or Committed Crimes In Effort To Exonerate Hillary And Indict Trump 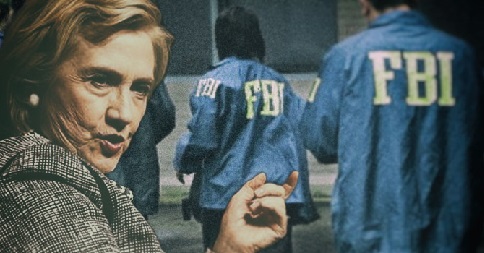 The FBI leadership under the Obama Administration took many actions that deviated from standard practice [i.e. were corrupt and criminal] in their efforts to exonerate Hillary from her crimes and then spy and frame candidate and then President Trump. Today current members of the FBI are embarrassed to even turn on their TV’s as a result.

Time magazine of all places reported recently about the many efforts the FBI took related to Hillary exoneration and then the Trump framing. These corrupt and criminal actions have taken a desperate toll on the current members of the FBI –

In normal times, the televisions are humming at the FBI’s 56 field offices nationwide, piping in the latest news as agents work their investigations. But these days, some agents say, the TVs are often off to avoid the crush of bad stories about the FBI itself. The bureau, which is used to making headlines for nabbing crooks, has been grabbing the spotlight for unwanted reasons: fired leaders, texts between lovers and, most of all, attacks by President Trump. “I don’t care what channel it’s on,” says Tom O’Connor, a veteran investigator in Washington who leads the FBI Agents Association. “All you hear is negative stuff about the FBI … It gets depressing.”

Of course the employees of the FBI are in a funk, their fearless and corrupt leaders, as well as leaders in Obama’s corrupt DOJ, went to extravagant links to exonerate the obvious criminal actions of Hillary Clinton, and then to do all they could to prevent candidate Trump from winning an election. Then once the election was won by President Trump, they went to unheard of depths of deceit and corruption to attempt to remove him from office.

1 – Comey breached Justice Department protocols in a July 5, 2016, press conference when he criticized Hillary Clinton for using a private email server as Secretary of State even as he cleared her of any crimes

4 – FBI wasn’t adequately investigating “high-risk” employees who failed polygraph tests (but, in fact, putting them in charge of high-profile investigations, like Peter Strzok who failed his poly). In one instance, an FBI IT specialist with top-secret security clearance failed four polygraph tests and admitted to having created a fictitious Facebook account to communicate with a foreign national, but received no disciplinary action for that.

5 – The FBI’s miss of the Russian influence operation against the 2016 election, which went largely undetected for more than two years (The FBI had the chance to kill this Russian intrusion years before it reached crisis point in the election). Mueller’s Russia probe found that Moscow’s operation against the 2016 election first got under way in 2014, but the FBI failed to address it.

6 – The FBI was getting information it shouldn’t have had access to when it used controversial parts of the Patriot Act to obtain business records in terrorism and counterintelligence cases.

7 – The bureau missed the significance of the damaging 2015 hack of the DNC database [although others argue that the DNC was never hacked – due to the FBI’s lack of investigative process, we may never know what happened.]

8 – The bureau also sat on the disputed “dossier” prepared by former British intelligence officer Christopher Steele. [Which was then used for the entire case against Trump and anyone near him].

11 – Comey broke with Justice Department rules and norms by assuming authority usually held by prosecutors and speaking in public about a case that did not produce criminal charges.

12 – Comey took copious notes and diligently informed others of all interactions with Trump while lying about having had any interactions with Obama, never taking notes or notifying anyone so even after having been warned of Mr. Steele’s motivations, even after having fired him for violating the rules, the FBI continued to seek his information—using Mr. Ohr as a back channel. This surely violates the FBI manual governing interaction with confidential human sources.

13 – FBI guidelines state that unverified information should not be submitted to the FISA court.

14 – They were passive, not proactive. The Obama administration “stood down” and watched these “activities” unravel. At worst, they possibly played a hand in creating circumstances to push the investigation forward into more serious stages that allowed for more intrusive techniques, such as spying. (The FBI is supposed to prevent crime, not watch it happen).

16 – FBI agents found Abedin deleting classified Clinton emails from her Yahoo account but failed to subpoena her devices. If they had, maybe they wouldn’t have had to reopen the case in 11th hour when NY agents found work emails on the laptop she shared with her perv husband.

17 – The FBI failed to notify Congress of the investigation into the Trump campaign for months rather than quarterly as was practice. [See Comey presentation to House Republicans in March 2017]

18 – The FBI did not pursue criminal charges when Clinton’s email archives were permanently deleted from her private server days after a subpoena for them was issued by a congressional committee investigating the 2012 attack on the U.S. diplomatic compound in Benghazi.

19 – The IG found that the FBI and DOJ during the Mid Year Exam probe of Hillary Clinton email server “did not require any witnesses to testify before the grand jury,” despite at least 3 witnesses lying to FBI agents.

20 – “[T]he Midyear team did not obtain search warrants to examine the content of emails in Mills’s or Abedin’s private email accounts and did not seek to obtain any of the senior aides’ personal devices.”

21 – IG Report: Nobody was listed as a subject of this [Clinton email] investigation at any point in time (So neither Hillary nor her top aides were formally under investigation by FBI at any time in 2015-2016, but the agents handling the issue thought it was a criminal action).

22 – The IG report indicates a strong pro-Clinton/anti-Trump bias in FBI investigators of Midyear and Operation Russian Collusion but it still went on without personnel changes or actions against the corrupt investigative team.

23 – The IG report found: “The MYE Team did not seek to obtain every device, including those of Clinton’s senior aides, or the contents of every email account through which a classified email may have traversed.”

24 – Manafort interviewed twice before joining the Trump team. If he was guilty of anything why did they allow him to join the Trump team?

25 – In 2008, a questionable person on McCain’s POTUS campaign caught the attention of FBI counterintelligence, and the FBI privately approached McCain. That questionable person was quietly removed from Team McCain but this same sensitivity was not provided to the Trump team.

26 – The corrupt Obama FBI and DOJ used the “salacious and unverified” opposition research called the Steele dossier to open a counterintelligence investigation and obtain warrants but it wasn’t even verified and it was created by the opposition party [DNC]. [Multiple sources]

27 – Unprecedented leaking to the press: 13 different individuals at the FBI were feeding a journalist information.

28 – Dan Bongino asks the question: How did Halper go from being a CIA informant to an FBI informant? And he’s right. It is a DEVIATION FROM THE STANDARD PRACTICE for law enforcement agencies to give up/share their asset.

29 – The “probable cause” arrest of George Papadopoulos is a deviation from the standard practice.

30 – Halper was a CHS (Confidential Human Source). FBI rules prohibit using a CHS to spy on Americans before an official investigation has been created.

31 – Stone and Caputo say they believe they were the targets of a setup by U.S. law enforcement officials hostile to Trump which was before an official investigation which again is a deviation from standard practice.

32 – The FBI interviewed Carter Page in March of 2016 about his Russian ties. Two months later, Comey is briefing the NSC about his concerns about Carter Page. Nothing of any note happened in those intervening months to cause a rise of concerns, so whatever concerns Comey had Comey had them before Page was hired on as an adviser. It was a DEVIATION FROM STANDARD PRACTICE for Comey to not have warned Trump about Page. Comey warns Obama instead who also takes no steps to warn Trump.

33 – Another deviation from the standard practice is to start an investigation without a crime.

34 – Planting the Isikoff article to be used in court to obtain a FISA warrant.

35 – Related to the FBI, it’s important to note that former DNI chief James Clapper limited the IC report for review to only 3 agencies rather than send the report out to all 17 agencies for review. This way he was able to control what was put into the report – another deviation from the standard practice.

This may only be a partial list of FBI abuses and actions taken with deviations from standard practice, if not clear cut crimes. The gangsters who ran Obama’s FBI, from Mueller to Comey, are so corrupt, current and former agents are now embarrassed to be part of the once storied federal agency. Quite frankly, it’s doubtful if the FBI can ever be trusted again!