The FBI And DOJ Are Treasonously Corrupt 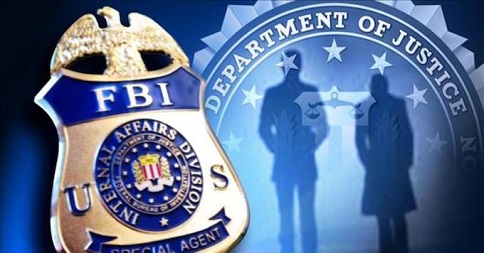 The corruption at the highest levels of the FBI is getting impossible to ignore — unless one is a member of the mainstream media.

In what should be one of the biggest stories of the year, 16 FBI agents raided the home of Dennis Nathan Cain on Nov. 19. Cain is a former FBI contractor, and what makes the raid highly questionable is the reality that he is also a recognized Justice Department whistleblower. One, according to his attorney Michael Socarras, who had already delivered documents the FBI was seeking to DOJ Inspector General Michael Horowitz, who turned them over to the House and Senate Intelligence committees.

Which federal officials? The head of the FBI at the time was Robert Mueller. The investigation was supervised by former Deputy FBI Director Andrew McCabe. It was centered in Maryland, whose U.S. attorney was Rod Rosenstein. And it ended in late 2015, during the tenure of former FBI Director James Comey.

In other words, the same James Comey who purposefully manipulated Rod Rosenstein into green-lighting an investigation conducted by Robert Mueller to determine if Donald Trump colluded with the Russians.

What does genuine collusion with the Russians look like? The Obama administration “green-lighted the transfer of control over one-fifth of American uranium-mining capacity to Russia, a hostile regime — and specifically to Russia’s state-controlled nuclear-energy conglomerate, Rosatom,” Andrew McCarthy explains. “Worse, at the time the administration approved the transfer, it knew that Rosatom’s American subsidiary was engaged in a lucrative racketeering enterprise that had already committed felony extortion, fraud, and money-laundering offenses.”

That racketeering enterprise was conducted by Vadim Mikerin, the Russian official in charge of Tenam USA, the American arm of Rosatom subsidiary Tenex. He secured the help of since-identified American lobbyist William D. Campbell to facilitate his deal-making. When Campbell became uncomfortable with the illegality of Mikerin’s machinations, he became an FBI informant.

The FBI had proof of Mikerin’s racketeering in 2010, when any disclosure of it would have killed the deal. Yet the agency allowed it to continue for another three years. At that point Rosenstein allowed Mikerin to plead guilty to one count of money-laundering conspiracy, rather than charging him with far more serious crimes with far more serious prison sentences.

The deal was cosigned by the DOJ’s Fraud Section, then run by Andrew Weissmann, one of Mueller’s lead investigators.

The raid on Cain’s residence was permitted by a court order signed Nov. 15 by Judge Stephanie A. Gallagher in the U.S. District Court for Baltimore. According to the special agent from the FBI’s Baltimore division who conducted it, Cain possessed stolen federal property. But the agency refused to explain who authorized the raid on a recognized whistleblower.

That didn’t sit too well with Senate Judiciary Committee Chairman Chuck Grassley (R-IA). He sent a letter addressed to DOJ Inspector General Michael Horowitz and FBI Director Christopher Wray, requesting that they “produce all documents to the Committee and provide an update with respect to the steps you have taken, or plan to take, regarding the FBI’s treatment of Mr. Cain’s disclosures no later than December 12, 2018.”

Grassley also wanted to know if the FBI was aware of Cain’s lawful disclosures to the IG and the congressional committees, whether it considers them protected, whether any of the information was classified, and if it was when Cain had it at his residence — and on what basis the agency conducted the raid, including a copy of the warrant and all supporting affidavits.

Grassley’s deadline was ignored, and the bombshell report by the Daily Caller two days earlier explains why: “The Department of Justice is requesting that the justification of an FBI raid on a reportedly recognized whistleblower’s home remain secret, according to a letter from U.S. Attorney Robert Robert Hur.”

The letter was a response to the Caller’s request to unseal court documents that would reveal the why the raid was conducted and whether the FBI and Gallagher were aware that Cain was a legally protected whistleblower. Hur insisted that releasing such info would “seriously jeopardize the integrity of the ongoing investigation.” He further insisted the department’s opposition to public release was an effort “to guard against possible tampering of witnesses and destruction of evidence, and to maintain the ability of the grand jury to investigate this matter.”

Apparently some efforts by the FBI and DOJ to maintain integrity and guard against destruction of evidence are “more equal” than others. In yet another stunning revelation, IG Horowitz revealed a number text messages between anti-Trump ex-FBI officials Peter Strzok and Lisa Page have “gone missing,” and government phones issued to Strzok and Page by Mueller’s office had been “wiped completely clean” — by the special counsel’s records officer. Americans also learned that form 302 records of the FBI interview precipitating Gen. Michael Flynn’s prosecution were altered — months after the fact.

How long the increasingly transparent corruption can stay hidden remains to be seen. MDA Analytics LLC, a company run by ex-federal criminal investigators turned over 6,000 pages of evidence attached to a whistleblower submission filed secretly more than a year ago with the IRS and FBI. That evidence alleges the Clinton Foundation engaged in illegal activity. Those documents are in addition to the more than 5,000 documents and detailed daily briefs to the FBI turned over by Campbell — also more than a year ago.

Nonetheless, the Russian collusion investigation remains focused on Trump — enabled and conducted by a cadre of people who themselves should be investigated.

And those who dare to expose their malfeasance? Until former Attorney General Jeff Session lifted it, Campbell was issued a gag order and threatened with prosecution by the Loretta Lynch-led Justice Department when he pursued a civil action that would have revealed information about the sale. Cain had his home raided, and the FBI declines to say who authorized it or why it was authorized.

In short, what is being reported by a wholly corrupt, Trump-hating media as an investigation into the current administration’s collusion with Russia is looking more like a counteroffensive, aimed at preventing genuine Russian collusion perpetrated by several members of the Obama administration — and possibly Obama himself — from being exposed.

No one can remotely justify giving the Russians any control whatsoever of America’s uranium production capacity. The stench rising from this deal and the wholly one-sided, see-no-Democrat-evil “investigation” conducted by Mueller is overwhelming.

“So I blow the whistle on the FBI, get raided by the same FBI, and now they want to keep the FBI’s reasons secret? Do we now live in a secret police state? Feels a little like 1984,” Cain tweeted last Monday.