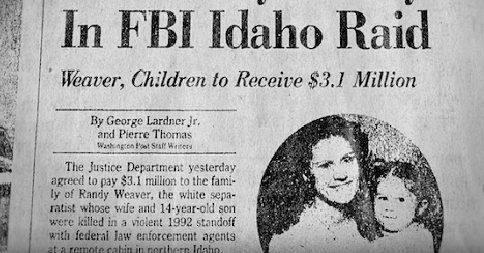 Trump’s AG pick was top cop during the federal siege and killing of Randy Weaver’s wife and son.

The Senate Judiciary Committee hearings for Attorney General nominee William Barr have focused heavily on Barr’s views on Special Counsel Robert Mueller. But nobody is asking about Barr’s legal crusade for blanket immunity for federal agents who killed American citizens.

Barr received a routine questionnaire from the Judiciary Committee asking him to disclose his past work including pro bono activities “serving the disadvantaged.” The “disadvantaged” that Barr spent the most time helping was an FBI agent who slayed an Idaho mother holding her baby in 1992. Barr spent two weeks organizing former Attorneys General and others to support “an FBI sniper in defending against criminal charges in connection with the Ruby Ridge incident.” Barr also “assisted in framing legal arguments advanced… in the district court and the subsequent appeal to the Ninth Circuit,” he told the committee.

That charitable work (for an FBI agent who already had a federally-paid law firm defending him) helped tamp down one of the biggest scandals during Barr’s time as Attorney General from 1991 to early 1993. Barr was responsible for both the U.S. Marshals Service and the Federal Bureau of Investigation, two federal agencies whose misconduct at Ruby Ridge “helped to weaken the bond of trust that must exist between ordinary Americans and our law enforcement agencies,” according to a 1995 Senate Judiciary Committee report.

After Randy Weaver, an outspoken white separatist living on a mountaintop in northern Idaho, was entrapped by an undercover federal agent, U.S. marshals trespassed on Weaver’s land and killed his 14-year-old son, Sammy. The following day, FBI sniper Lon Horiuchi killed his wife, Vicki, as she was standing in the cabin doorway. Horiuchi had previously shot Randy Weaver in the back after he stepped out of the cabin. The suspects were never given a warning or a chance to surrender and had taken no action against FBI agents. Weaver survived.

After an Idaho jury found Weaver not guilty on almost all charges, federal judge Edward Lodge slammed the Justice Department and FBI for concealing evidence and showing “a callous disregard for the rights of the defendants and the interests of justice.” A Justice Department internal investigation compiled a 542-page report detailing federal misconduct and coverups in the case and suggested criminal charges against FBI officials involved in Ruby Ridge.

Barr told the New York Times in 1993 that he was not directly involved in the Ruby Ridge operation. Two years later, the Washington Post revealed that “top officials of the Bush Justice Department had at least 20 [phone] contacts concerning Ruby Ridge in the 24 hours before Vicki Weaver was shot,” including two calls involving Barr.

In January 1995, FBI director Louis Freeh announced wrist slaps for the FBI officials involved, including his friend Larry Potts, who supervised the operation from headquarters and who approved the shoot-without-provocation orders that “contravened the constitution of the United States,” according to the Justice Department internal report. When Attorney General Janet Reno later nominated Potts for deputy director of the FBI, top newspapers and members of Congress protested but Barr told the New York Times that his friend Potts “was deliberate and careful, and I developed a great deal of confidence in his judgment… I can’t think of enough good things to say about him.” A few months later, the FBI suspended Potts after suspected perjury regarding Ruby Ridge. (Potts was not charged and retired two years later.)

The Justice Department paid $3 million to settle a wrongful death lawsuit from the Weaver family. But when Boundary County, Idaho filed criminal charges against Horiuchi, Barr sprang to action seeking immunity for FBI snipers. He spearheaded efforts to sway the court to dismiss all charges because holding a sniper liable would “severely undermine, if not cripple, the ability of future attorneys general to rely on such specialized units in moments of crisis such as hostage taking and terrorist acts.”

When the Justice Department won an initial appeals court victory in the case in 2000, federal judge Alex Kozinski warned in a dissent of a new James Bond “007 standard for the use of deadly force” against American citizens. The same court reversed that decision the following year. Kozinski, writing for the majority, declared: “A group of FBI agents formulated rules of engagement that permitted their colleagues to hide in the bushes and gun down men who posed no immediate threat. Such wartime rules are patently unconstitutional for a police action.”

Does William Barr still endorse “wartime rules” and a “007 standard” that absolve federal agents for questionable shootings of Americans? Does Barr consider “illegal government killings” to be an oxymoron? Best of all, can Barr explain to us his understanding of the phrase “government under the law”?